You know, people used to knit everywhere even while they walked from place to place. Heavens I can knit in the car sometimes but…… those were other times and that was work!! Anyway as some of you know I have over the last weeks been ill an illness that required bed rest ie sleep but didn’t get much. Anyway this has lead me to the pile of holiday reading books collected in case I get one. I’m not a reader of any old novel or the great masters, I favour story over verbage anytime. As  a consequence the pile contained in no order a new Elly Griffiths; a Historical novel about medieval Wales; the new Phil Rickman (the only author that I own all of his books); a book about The Welsh Weaving Industry; a Children’s version of the Just So Stories (don’t ask) and a novel called Dying in the Wool by Frances Brody. There are themes there, detective with difference type books;  references to places I live or lived or been; historical?

Over the last few days I have read the last one.  I went for the novel with wool in the title and a natty 1920s cover!!! Imagine Miss Marple (20 years younger) meets Foyel’s War (But WW1 not WW2) meets Bradford (Worstopolis) just post its WW1 boom still up but just. The story is set close to my home town of Keighley and about the death of one of big mill owners. Facts and fiction  wandered about abit and the referece to a skirt being caught in mistletoe nearly lost me early on (she would have had to be up the tree not walking past it!!). Never a mention of the Airedale?

What kept me reading wasn’t the story as such (some of the characters did things abit out of character towards the end) but for the nostalgic glimpses of places and the industry I sort of remember  – not that I remember 1920’s Bradford but I do remember the Airevalley – Silsden (the town I grew up in) having 7 or 8 mills/sheds in the 1970s. The constant rumble of weaving looms, the noise that hit you if the shed doors were open on hot days.

It made me think about of the how much of the history of the industry  and the area  I don’t know. The power of the mill owners and the money they made on the backs of ordinary people. How big the Mill buildings were, how dangerous the work was and how skilled people needed to be just to survive and how it has gone….. somewhere else or just contract I’m not sure? China after all, is the biggest importer of wool in the world. Not all of the industry has gone there, though most imagine it has.  Wool is used for other things these days, carpets and knitting yarn!!. We don’t wear wool cloth like we used to and personally, I blame central heating. 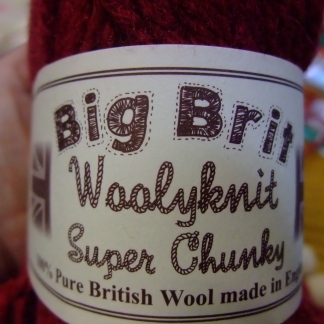 Yorkshire  retains at least some of its skills tucked away in small mills and spinning sheds, dye houses. In big institutions like The Wool Exchange and the British Wool Marketing Board. The likes of Stylecraft’s mother company are still spinning, as are  West Yorkshire Spinners and Woolyknit promoting British wool. There are small numbers of weaving and dying companies holding on to their skills and expertise and they are mostly based in Yorkshire home of the wool industry. There are people who have worked there for forty years, some since leaving school at 15!! How many of our current young people will be able to say that?

I haven’t lived in Yorkshire for 35 years and I feel a little home sick!!!