We have a sewing session on Tuesday evening. This group of ladies has been with me since almost the begining of Red Apple. They are a lively bunch always looking for new ideas to sew – last week they had a copy of Yours magazine with a cute little crochet duck…. 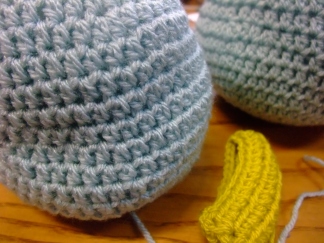 On Tuesday afternoon (I had forgotten the rainbow cardi and still haven’t decided on the fringe on my hap),  I took a look at the pattern for the duck….  Fun to make it said, easy crochet rounds, DK yarn, 3.5mm hook, at 7 1/2″ tall shouldn’t take too long……. By teatime I had a head, a beak and part of the body and things were looking slightly arye… 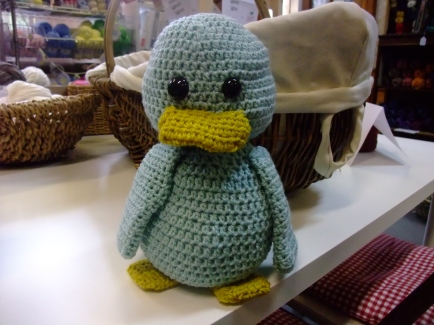 It got worse this morning.. I have the rainbow cardi with me and want to get going with it . However I decided to be good and the ducky would not take me long to finish!!!

The pompoms were a puzzle from the start I have a pompom maker that makes quite small pompoms but those would have to be minute. I began to consider alternatives. But as the stuffing progressed I thought maybe that isn’t going to be a problem. Having sewn it up I realised the issue was big rather than small!! The parts all fit together and it looks like the pictures apart from the odd eyes a characterful addition to the plan, I thought, and the pompoms were in proportion. looking good. 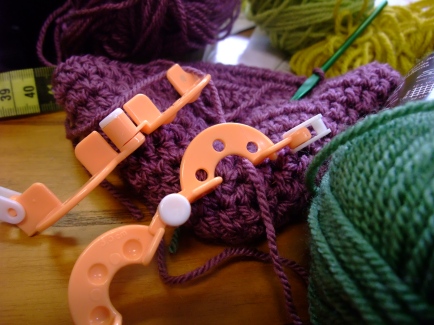 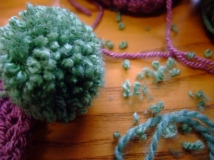 Scarf ah ah .. whos a silly Billy then? DC  means double crochet hook in, pull through loop pull through both loops – there is no wrap first. I have completed the poor ducky in half trebles what a numpty!!! The pompoms however fit just right. 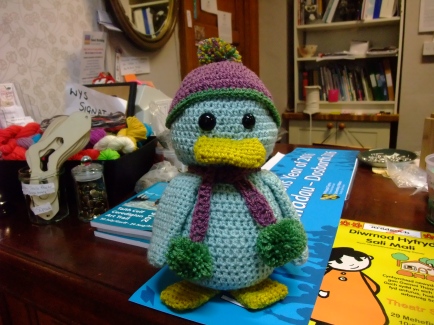 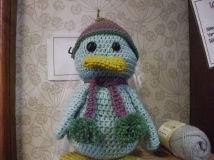 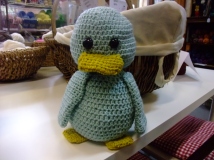 It is now 3:30 and said duck is finished but well he is not 7 and a half inches tall. I’ve upsized again for the shop. This is Duffy  – named in honour of some little Scots visitors we had today in the shop -who wanted to see him finished with his hat on !!!